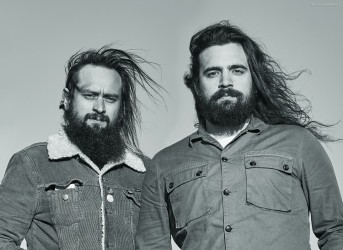 Interview with The Picturebooks about “The Major Minor Collective”

The blues-rock duo THE PICTUREBOOKS from Gütersloh is certainly one of the best music exports from Germany. Their latest album “The Major Minor Collective” is full of high quality features with artists from Sweden, USA and Norway, so we decided to publish this interview in English too. krachfink spoked to guitarist and singer Fynn Claus Grabke about the development of this album.

Your band is named THE PICTUREBOOKS, if you could have one photo from the most memorable moment in the bands‘ career, what would it show?

Us getting shot in a drive by shooting in Albuquerque, New Mexico 5 minutes before show time and a bullet striped my arm and I was bleeding heavily and still went on stage.

You made this album with a lot of awesome guest musicians, how did you choose them?

Went with the flow, it was more some kind of a snowball effect to be honest. At first we just thought to get some help from other artists for some songs that felt like they needed some more attention or that little extra… that slowly turned into the idea of dong a whole album like that.

Tell us more about the collaboration, did you develop the songs together or did you offer your guests the music and lyrics?

We started creating a secret homepage that had round about 19 songs on it at some point and let each artist choose which ever song they wanted to pick and do what ever they wanted to do with it. Only with Elin and Dennis were we in a room together and wrote the songs together. It was interesting to work with people, without even being on the same continent with some of the artists and still have he feeling, that we were in a room together creating these songs.

What is the most powerful thing about Blues Rock?

Well, to be honest we truly believe that blues can be the most boring and unexciting thing in the world. And we wouldn’t even know what makes blues, blues, as we never learned to play an instrument professionally, I cannot play a freaking chord to this day. We just have something going on in our hearts and used music as a tool to express what was going on in it. For some reason that sounds bluesy but thats by accident. Maybe that’s what blues is in the first place anyway. A feeling. That’s what a guy said to us in New Orleans, Louisiana after one of our shows. He said “i´ve been playing the blues my entire life, I’ve seen some of the biggest names in blues perform life, and I can tell that you guys don’t have a clue abut what blues is and still I feel like I’ve seen the best blues show I’ve ever seen. The last time I felt this way was when I saw some of the big names perform their version of the blues and it is something that cannot be learned, it can only be felt. You guys felt it and this way I get it too!” I think that was the explanation about what the hell we are doing here, haha.

Your duo started as a trio, could you imagine after these new collaborations to expand up your line-up?

Yes and no. Philipp and I have this weird thing going on where it must be really hard for a third person to co exist. Its more than friendship, more than brotherhood, we´re one. The band would need someone that can except that. I guess, we see ourselves with other musicians on stage at some point to create a bigger live show but never with a new official band member, if you get the idea.

The album is called “The Major Minor Collective”, how hard is it to keep a song in the interplay balanced between simplicity and dominance?