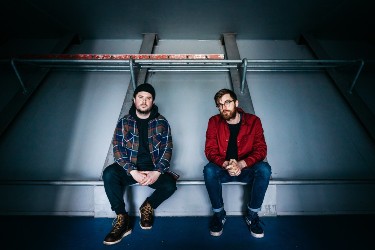 Interview with John about the album “Nocturnal Manoeuvres”

What do you think, can post-punk sound really good when it’s done by just two people? Yeah, you just have to check out JOHN, a duo from London made up of two guys named John. They just released their third album called “Nocturnal Manoeuvres” and we talked about this dark and atmospheric top album, the lyrics and their inspirations and ambitions to make music.

Except for being both your first name, does JOHN stands for anything else?

We really didn’t want a name that coloured the type of music that we make, so picking a deliberately unsensational and logical name – we’re both called John – made sense. It’s a reminder that the musical detail is more important than the surrounding collateral often attached to bands or musicians.

This is already your third album, but can you tell me more about the origin of your band?

We’ve been a band since 2013/2014 – formed after we both met at university in the East End of London. We both shared a lot of musical interests and decided to get in a small room to see what would come out – songs seemed to flow shortly afterwards thankfully!

Did you immediately realize that you both have a similar vision for making music?

We both played in bands throughout our formative years so had experience of the demands of being in a band. Having realised similarities in taste we spent a lot of time heading to shows together in London – and we quickly got hungry to see whether we could collaborate musically.

The album title „Nocturnal Manoevres“ is about criminal dealings at night. It is not nessecary to keep those behaviours exclusively at night, we can see this in German politics for example. Do you see the same development in the UK, that the policitians are getting more and more shameless without any proper consequences?

May be a translation but it doesn’t necessarily mean something criminal. We’re certainly not interested in talking about politics in direct manner, we write songs from the observations of our everyday experiences and culture. This is obviously inherently political, so there is always a potential reading for a listener – but it’s not something that is hardened or direct. I’ve always wanted multiplicity to interpretation of my lyrics and at no point are their any literal sign posts to specific events or characters from the events of the last few years. I’m certainly not saying that we don’t think that this country hasn’t made an ever growing string of calamitous errors though. It’s all very frustrating I promise!

The album starts with an atmospheric intro, how important is the structure of an album for you?

We always see the album form as a way of capturing a chapter of our lives and time, so we always like to consider the way tracks run together as a whole. We had originally envisioned the intro “Return To Capital” as a segue between tracks – but it became very clear that it had to stand at the top of the album – and atmospheric first second which gets side-swiped by the second track in surprising fashion.

If I have to define your music, I would say it’s dark post-punk with some sense of hardcore, but also some sprinkles of raw black metal.

We’re both fans of a broad range of music, but we’re never that bothered about where JOHN gets hedged in a genre’d sense. We’ve always wanted it to be read in terms of its ideas, but we can obviously see why it fits into the traditions of punk and post-hardcore. If post-punk means rejigging the often repetitive schemes of what “punk’ is then that’s fine with us.

There is a big scene of post-punkbands from UK that swept over to Europe in the last year, is there solidarity and do you support each other?

Regardless of genre, we’ve been privileged to meet so many amazing and talented people over the last ten years, and it’s heartening to know that people are willing to help when in need of help. We have a habit of running into old colleagues and acquaintances all over the place – even when not expecting it. The network just keeps growing.

What is the meaning of „Sibensko Powerhouse“? Sibensko is an aquaplanet in the expansion region of the galaxy in Star Wars, some kind of underground city where criminals hide their business from the government.

Once again I really like the multiplicity of interpretation – I was aware of it, but it actually originated from the Croatian city Šibenik – having built the lyrics from a hazy memory whilst visiting a festival over there. I heard a familiar song playing from over the crest a desolate hillside and it was a pretty unique moment that stuck with me. I wanted try to reinterpret the moment in the fiction of a song.