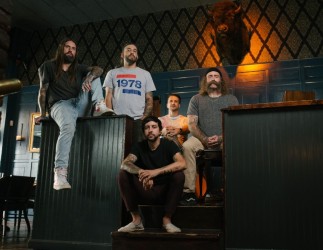 Interview with Keith Buckley from Every Time I Die about “Radical”

The american rock band EVERY TIME ARE DIE are going to release their new album “Radical” tomorrow. An album title that is not used coincidentally, because the album is full of lyrical and musical radicalism. We spoke to singer Keith Buckley about this explosive album.

You wrote 16 (!) songs on a really high level, what mades you as a band so damn creative in a time that was really paralyzing for some creatives, what influenced you to produce an album that is so on point?

The pandemic actually didn’t effect our process, we had the whole thing written and recorded just like a week before Buffalo went into lockdown in 2020. We could have released it online at any point after that but we knew we had something special and it should wait. It should age. It should wait patiently at the station until the right train arrived. now its here. I’m excited to find out where its going.

I’m not really sure, but I think the album is not about a single radicalness, it is more about all the facets of it.

There are definitely a few ways it could be applied. That just means it was the right title choice.

“People Verses” and “We Go Together” really impressed me, because of its content. What is your attitude about mankind itself? The only group of individuals that can stop this shit, but they keep on destroying it. We all are a part of it, so it‘s. hard to be judgemental, because it is impossible to fully remove ourselves.

Yeah I mean, not much has changed since the album “From Parts Unknown” in regards to my view of it. It still stands that I believe humanity is doomed unless we can pull out of this tailspin, but whereas in “From Parts Unknown” i focused on the “individual” response to that idea in hopes of finding an answer, on this one I approached it from a “collective” mentality and came across a much clearer answer. There is strength in numbers, in unity. In the “Truths” that connect us not so much mentally but spiritually and psychically.

What does a musician at your level do to improve your craft?

The album starts with a disturb signal. And man, in the last years we had a lot of alarms that showed us the state of the world. What was, in your opinion and your personal perception as a husband, father and musician, the most scary one?

The “scariest” things were always the stories getting the least amount of attention. A man set himself on fire on the White House lawn. does anyone know that person’s name or what drove them to make such a profoundly symbolic statement? He could have been anyone. such irrefutable proof of the darkness that had overtaken that person. Its terrifying.

“Planet Shit” has a lot of religious cross references, you sing about the “ten commandments” and “what kind of heaven awaits someone who is so cruel”, why did you take those references, I would guess you aren’t are religious person, is it because that was maybe the last or longest standing border since now?

People tend to guess that I’m not religious. They guess correctly. But I am a very spiritual person and as such, I have an appreciation for the stories in religious text. As a fan of literature, I see them as amazing tales. some True, some not. Thats the fun of reading them.

“Give a sick man his poison pill” you sing in “Post-Boredom”, lets step in the popular Matrix-scene, would you take the pill to forget everything and if yes, at which point of your life?

No way. I love where I’m at. Unless the pill is like a cool mushroom trip that only lasts for 2 hours tops and then leaves you feeling energized. I’ll take that one

“Desperature Pleasure” is some kind of wake-up call. Could you name one or two things that are easy to change and would make the world much better?

Yeah, I mean there’s a long answer and a short answer. Long answer is this: Look closely at your most intimate relationship. Is that persons Love harming you in any way, either physically, mentally, emotionally, or psychically? If the answer is Yes then find the courage to get out from under it. Being alone with your True Self is a beautiful place to start making positive changes.

Short answer is this: Look into a “Female Lead Relationship” and get into one with your true Love. It’s the fucking best.

EVERY TIME I DIE online