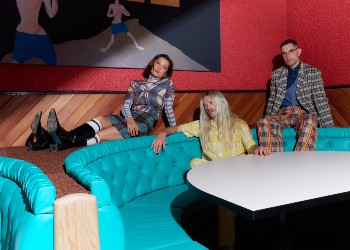 Interview with Children Collide about “Time Itself”

In my opinion, CHILDREN COLLIDE is surely one of the most underrated bands from Australia. The trio shows rock in all his varieties, with a simple but very effective punch and a good sense for melodies and hooks that are catchy as fuck, but not intrusive. The new album “Time Itself” is nearly a perfect, creative rock album, that brings his messages as inconspicuous as possible. And to close the circle, the music on it is absolutely timeless. The questions have been answered by singer and guitarist Johnny Mackay.

The album is called “Time Itself” and time is maybe one of the most mysterious things in your life. All we are know is, that it runs out for every single one of us. How do you take care about your own lifetime, are you trying to be as productive as possible or is it ok to waste some time on stupid things?

I try to be as frivolously productive as possible. The more silly things I make, the more life seems to serve up interesting life experiences. Sometimes what people might call wasting time is when my best ideas come to me. It was once said to me there’s no evidence to suggest life needs to be taken seriously. That resonates.

I would like to know more about the opener “Funeral For A Ghost”, what’s the message behind it? I have at least two different interpretations about it. One is that some people are ghosts, even before they die. And the other is, that the ghost is representative for issues that have to be buried, what means you have to deal with them.

I don’t like giving “nutshell” explanations for my songs. You can enjoy both of those interpretations. I think art should provoke more questions than answers. People don’t ask enough questions. They search out big simple answers to life and ignore the glaring holes in them. The artist’s job is to highlight the cracks and holes and ask more questions. Maybe Funeral for a Ghost is about that?

Your album shows a big variety of rock sounds, so obviously you don’t think about genres when it comes to music. But how would you define music, for maybe an alien who has never heard music before?

DEFINE MUSIC. Hmmn. That’s an interesting thought. I think music is a universal sonic language of invisible feelings printed over a gelatinous parchment of time and silence.

Can you remember a light bulb moment that infected you with the passion for music?

No, but I remember when I finally admitted it was why I was put on the earth. What a relief!

You play as a trio, what are the main advantages about this?

There’s a controlled chaos to the push and pull of a 3-piece punk rock band. I find it hard to explain, but for a while we tried playing to a backing track to include some of the cool noises we recorded in songs on our third album, but it lost all the vibe. I think, it also has to do with all of us having our own segment of the waveform. You end up feeling psychically connected on stage and I think the audience can pick up on that too.

You have a lot of compositions on “Time Itself” where you surely need more hands to play it live, so will you have special live line-up?

Haha, good follow up question. I actually think we’ve tried almost all of them with just the three of us and they work. Maybe would be cool to get whoever we’re touring with to play some extra guitar on “Mind Spider” though.

“Uh Oh” is very obviously inspired by THE WHITE STRIPES it’s very catchy and simple. Do you think that rock nowadays is sometimes too complicated?

Well that is Ryan’s riff so I’m not sure what inspired it, but it’s a good one. Simple, complicated, a good song is a good song. My favourite song is “Windmills of Your Mind” by DUSTY SPRINGFIELD. I tried to learn it once…pretty complicated!

I like this long and lazy song “Mind Spider”, do you tend to overthink sometimes?

That song is about a genius I used to be in love with. She definitely overthinks everything but I think that comes with the territory of having an impressive brain.

How do you write your lyrics? In my opinion they often seem to be straight forward but most of them have a second level (“Language Is A Prison”), so who is responsible for lyrics and what requirements do you have on them?

Definitely always consciously or subconsciously embedding my lyrics with double-entendres and secret jokes. My main requirement is that I don’t cringe when I have to sing them 300 times later in front of people.